Hattiesburg, Mississippi – Continuing its commitment to transparency, the City of Hattiesburg released a two-year progress report for the Your Penny at Work funding. This funding is generated by a 1% tax on hotel/motel/restaurants that was approved by the citizens of Hattiesburg in April 2019.

As voted on, this funding creates a revenue stream split between the City of Hattiesburg for parks and recreation projects and The University of Southern Mississippi to support the renovation of Reed Green Coliseum.

Since 2019, the additional revenue has generated a total of $2,342,447.63 for the City of Hattiesburg’s portion and has resulted in the completion of seven projects, with three additional in progress and two slated to begin soon.

“When we began talking about the 1% tax before the vote took place, we vowed that we would be transparent with all funding revenues and project costs,” said Hattiesburg Mayor Toby Barker. “Throughout the last two years, even in a pandemic, we’ve stayed true to that. Additionally, this two-year report is a snapshot of all of those projects at a glance with a look at what is to come.”

Projects currently in progress include a splash pad at Dewitt Sullivan Park, playground upgrades at Kamper Park and ongoing repairs and upgrades for the Hattiesburg Community Arts Center.

The referendum took effect in June 2019, with the first revenues reported in August 2019 (each month’s receipts show the economic activity that occurred two months prior). A breakdown of revenues by year include:

“This funding has been a gamechanger for our Parks and Recreation department, allowing for multiple large capital projects over the course of the past two years and smaller upgrades where needed,” said Barker. “We continue to see progress shared throughout every neighborhood, thanks to the input from citizens and the direction and leadership of Chris McGee, parks and recreation director, and Sid Gonsoulin, construction and projects manager.” 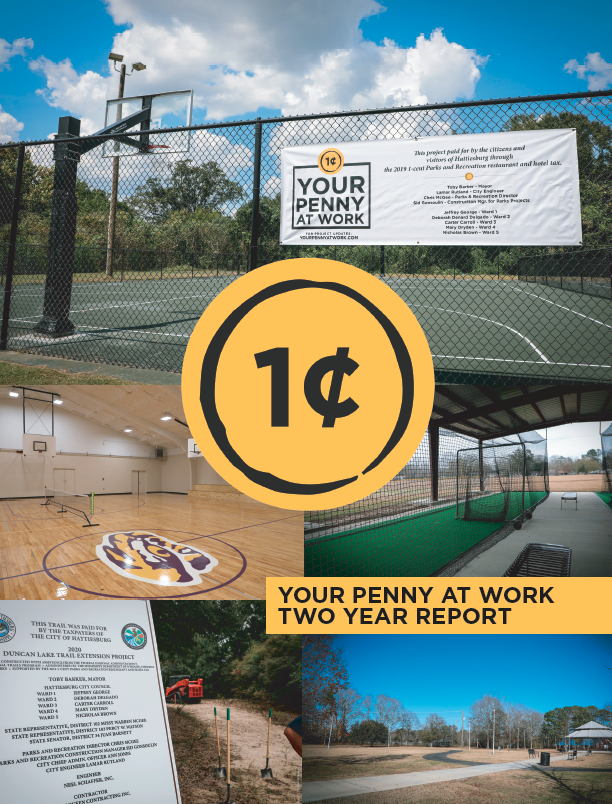 Re-test of Sirens Scheduled for May 1 at 9 a.m.previousHattiesburg Parks & Recreation Opens Registration for Summer Day Campnext