During her tenure at the Hattiesburg Police Department she has served as a patrol officer, training instructor, sergeant in the detectives division, lieutenant in internal affairs, the accreditation manager, liaison to the Forrest County District Attorney’s Office, patrol commander, Neighborhood Enhancement Team member, and the special Tactics and Rescue Team’s hostage negotiator.

Sealy is a graduate from South Jones High School, and she studied at Jones County Community College and Arizona State University. 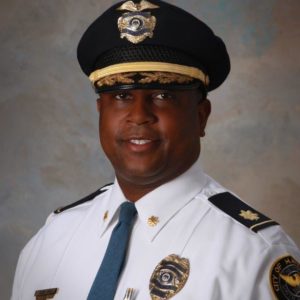 Assistant Chief Hardy Sims, a native of Hattiesburg, Mississippi began his law enforcement career in 1992 as a police officer with the Hattiesburg Police Department. He has served as a patrolman, Neighborhood Enhancement Team Leader, criminal investigator, DARE instructor, GREAT instructor, ropes course instructor, public information officer and community relations officer.  He has a long and distinguished career, serving as a sergeant in patrol, lieutenant in community relations, captain in patrol, major of operations and currently serves as the assistant chief.

His areas of responsibility include patrol, special operations, community relations, telecommunications and animal control.  Sims, a former hostage negotiator, has also been the commander of the department’s Special Tactics and Rescue Team.

Asst. Chief Sims is a 2005 graduate of the Federal Bureau of Investigation National Academy and has attended numerous other law enforcement schools and seminars.

Additionally, Sims has served on civic and community boards to include: Mississippi Law Enforcement Officers Association Board of Directors 2003 & 2004, and PACE Head Start Executive Board of Directors in 1995 and 1996.  He also received the Distinguished Sales and Marketing Award in 2002.

To contact the Assistant Chief of Police, you may send an email hsims@hattiesburgms.com or call 601-545-4902.