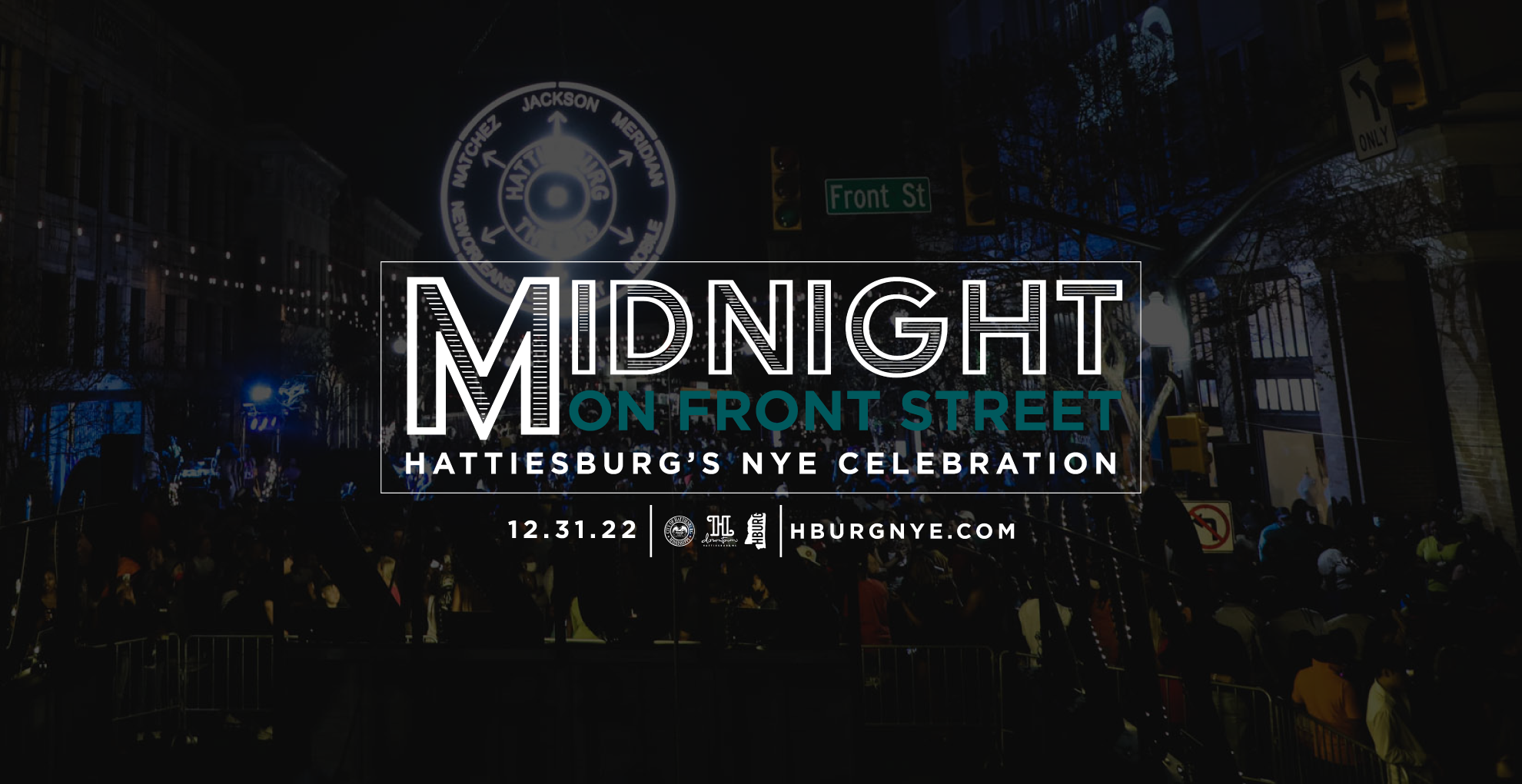 We invite you to meet us at Midnight on Front Street for Hattiesburg’s premier New Year’s Eve Celebration!

Mayor Barker makes remarks and begins the countdown to Midnight. 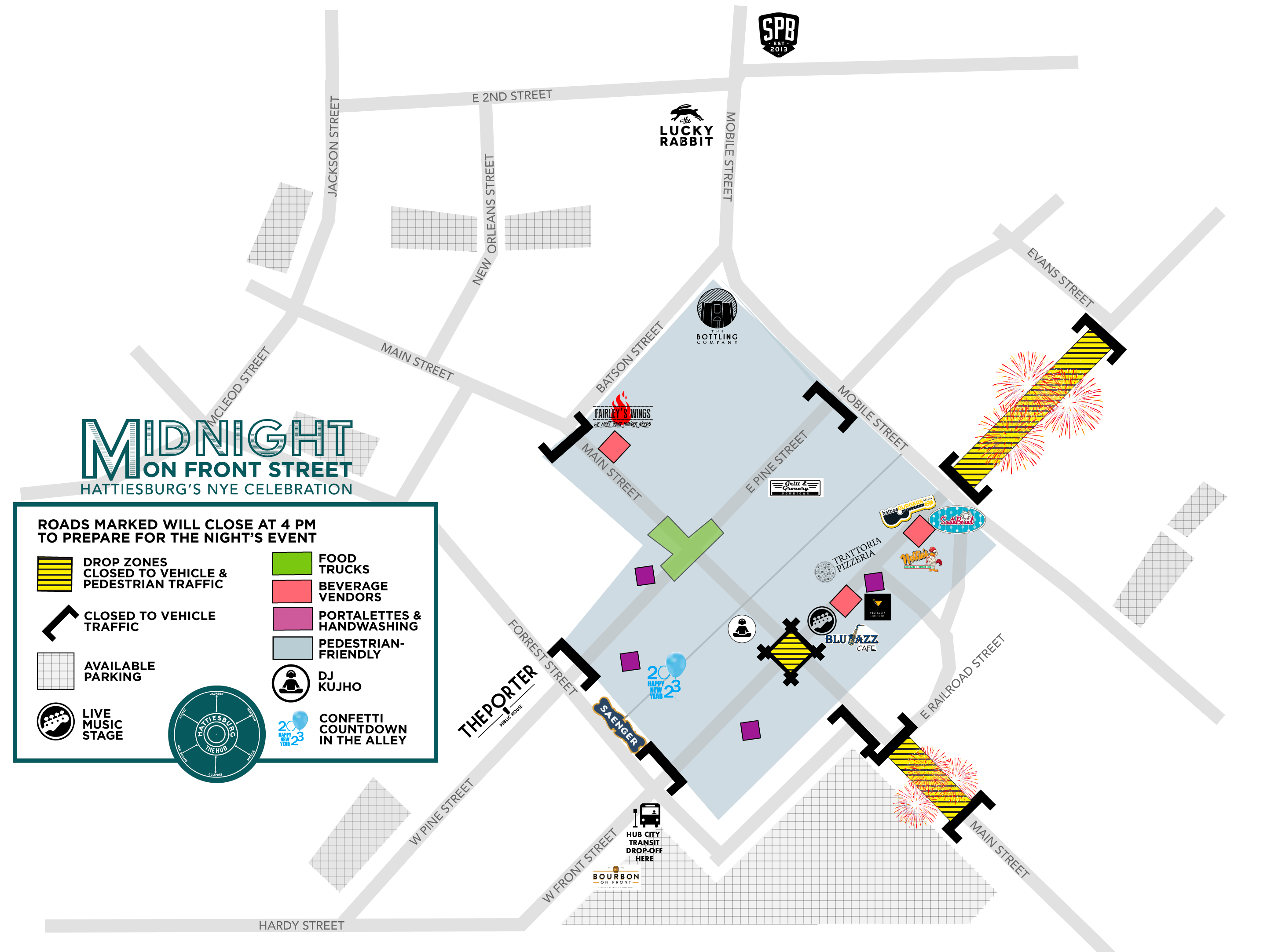 At 4 p.m. on Saturday, the following roads in Downtown Hattiesburg will close for event set-up:
Mobile Street will remain open to traffic until 11 p.m. to prepare for the fireworks.
The drop zones for fireworks at Midnight will close at 11 p.m.
All roads will reopen between 2 a.m. and 3 a.m.
Hub City Transit: The blue route will run along Hardy Street from Downtown Hattiesburg to Midtown between 8 p.m. on December 31 and 2 a.m. on January 1. The bus will make guaranteed stops at the Midtown Market (Mahogany Bar, El Rayo, Crescent City Grill and Ed’s), the District at Midtown, the Keg & Barrel and Forrest Street/Front Street. A transit map is also attached for reference. 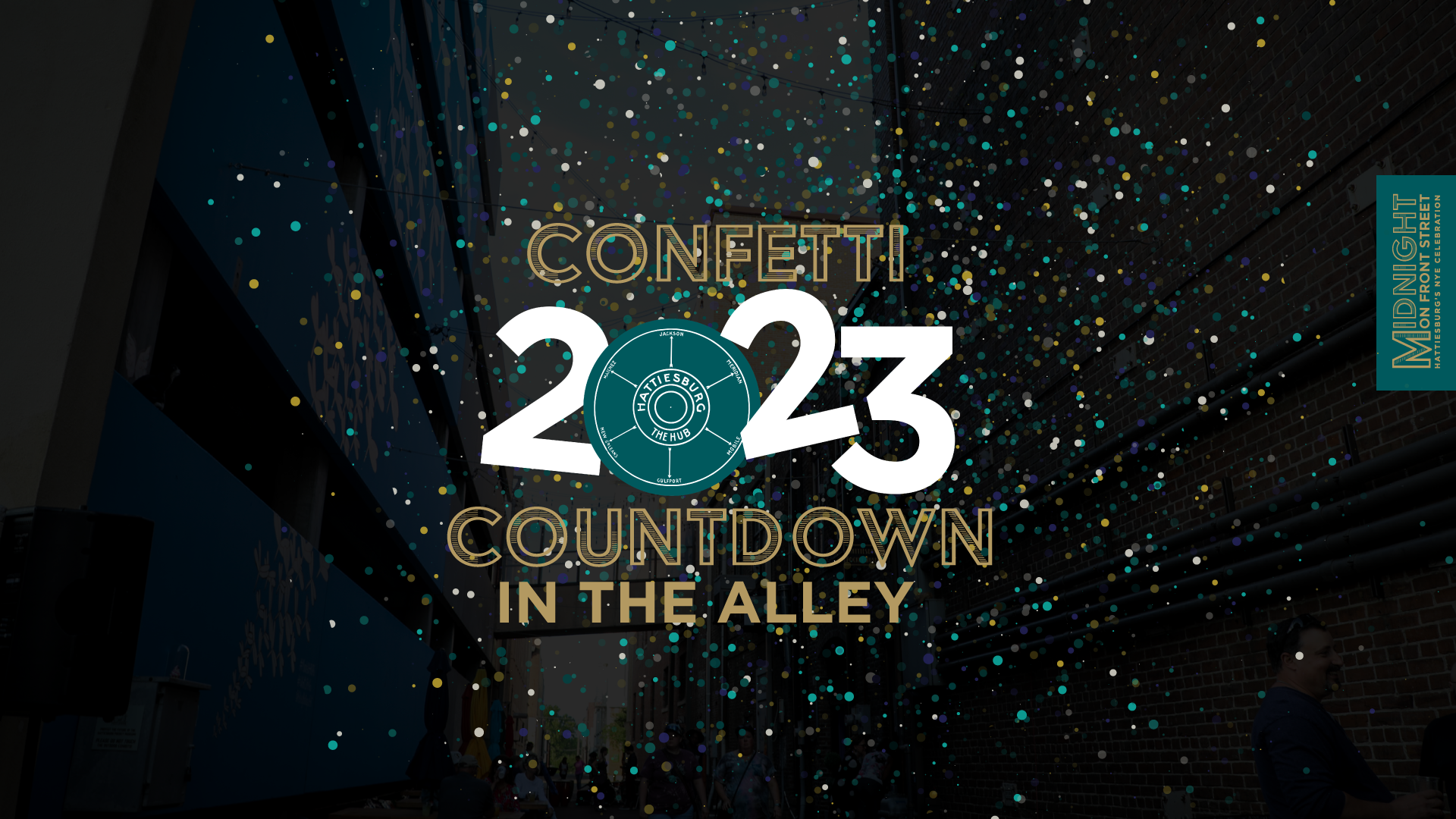 Thanks to our friends at Blooms Hattiesburg, our Kids Zone is complete with its very own countdown event! Crafts, family-friendly activities, concessions and a confetti countdown ending with a balloon pop will all take place in the Pocket Museum Alley (between Forrest Street and Main Street) in Downtown Hattiesburg. The event area will open at 6:30 p.m. and the balloon pop will take place at 8 p.m.

Best known regionally for his high-energy, open-format sound, Kujho has been crafting his DJing skillset for 13 years over a wide variety of musical styles, venues, and audiences.

He is gifted with a unique ability to blend new flavors with familiar sounds, creating a vibe that’s addictive to audiences and solidifying his role as one of the region’s tastemakers and a fan favorite.

Kujho continues to expand his brand and fan base from California to Florida and many places in between, performing at some of the best venues and top events in the Southeast.

From Hattiesburg [the HUB CITY] Mississippi, Hub City Sound Machine is all about the music. A local cover band, HCSM covers a broad spectrum of material from classic R&B, rock, funk, a little bit of country and late-model pop.

They feel lucky to be from a place where music is appreciated and the band is a product of this dynamic atmosphere. A diverse crowd of individuals- seasoned players, music students, music instructors- bringing together many years of performance experience and a passion to take the stage!

Around town, you can find them playing clubs, parties, festivals and private functions.

BIG FUN Brass Band is exactly what it sounds like. A high energy New Orleans style brass band with the sole focus of bringing the Fun. The group is extremely versatile, performing in a range of styles from traditional 2nd-line music for parades, top-40s set for weddings and the like, then finally & most prominently a late-night party setlist focused on originals written by the group along with other banging covers to keep the party going. BIG FUN is a group of close friends who have been performing together for the past 10 years headed up by Corey Bostic & Abby Tideman.

In addition to Downtown Merchants, the following Food Trucks will be located around the Main Street/West Pine Street intersection. The list includes:

THIS EVENT IS MADE POSSIBLE THROUGH THESE KEY PARTNERSHIPS​

At 7 p.m. on Thanksgiving Day in 1912, a large crowd assembled at the Commercial Club meeting room (in what is now Downtown Hattiesburg) for the unveiling and illumination of the “Slogan Sign.” During this time, the Commercial Club routinely met in the original Citizens Bank building which is now home to PACE Headstart and PRVO offices at the intersection of Front Street and Main Street.

The sign, manufactured and donated to the Commercial Club for the benefit of the city by the Henry L. Doherty Company, was unveiled that night with in front of a large crowd and with great anticipation of what the sign would mean for Hattiesburg.

This company, a leader of Hattiesburg industry at the time, promised that if the Commercial Club would select a slogan and design a sign for its display that it would manufacture, erect and maintain – without any cost to the city – a sign 42-feet in diameter, with 1,142 lights, rising 50-feet above the Ross Building (now the American Building on Front Street) and 140-feet from the sidewalk.

The Commercial Club fulfilled their promise – selecting R. R. Swittenburg’s entry of “The Hub City” as the winner. Quickly following, the Henry L. Doherty Company also fulfilled their own promise.

In a 1912 article describing the illuminating event by The Hattiesburg News, it was stated that the sign was a visual depiction of the vision for Hattiesburg – a tribute to the spirit of Hattiesburg’s people and the growth it would continue to maintain. The Honorable S.E. Travis, a formal representative of the Henry L. Doherty Company added, “Hattiesburg today is what she is because of man’s skill and energy and enterprise.”

After the presentation of the sign and remarks by Travis, the Hattiesburg High School Glee Club performed “America” and Reverend E. D. Solomon took the stage to provide remarks in accepting the sign on behalf of the Commercial Club.

Solomon opened his speech by describing the occasion as “the most auspicious ever celebrated in Hattiesburg” and stated, “It is the Hattiesburg spirit to go after things and to get them, especially large things. If this sign is to be an example of what the Henry L. Doherty Company is to do, Hattiesburg will indeed become The Hub.”

After all speeches and a band performance, the button was then pushed “and one of the prettiest electric signs ever looked upon burst upon the scene, and the throng sent up a shot that lasted for several minutes, while thousands of people gazed in astonishment at the sign which one man said was just 100 times as pretty as he pictured it in his mind to be.”

For several years after the sign was illuminated in 1912, the sign sat atop the Ross Building where it promoted Hattiesburg as the central city in Southern Mississippi. It stayed lit from 6 p.m. until 1 a.m. each night.

Unfortunately, local lore states that at some point between the Great Depression and World War II, hard times brought the sign down. It was deconstructed and sold off during the scrap metal drives of World War II. These drives were a popular way for all to contribute to the war effort. The unused or unwanted metal was then used to build ships, airplanes and other equipment needed to fight the war.

In 2018, with the notion that the legacy of the Hub Sign should not be forgotten, Mayor Toby Barker gathered a team to discuss bringing back the iconic sign with enthusiasm and celebration that mirrored 1912 – through Hattiesburg’s own New Year’s Eve “drop.”

And as the first Mississippi city to join its partners in the Gulf South, approximately 4,000 Hattiesburgers gathered to count down the New Year on December 31, 2018, while watching a three-sided replica of the 1912 Hub Sign drop at the intersection of Front Street and Main Street. Weighing 375 pounds, the three sides of stamped steel was lit by hundreds of LED lights and suspended approximately 100-feet in the air.

While a little different in size and scope, it was symbolic that the new sign was back in the exact same spot where the iconic 1912 sign was presented to the Commercial Club 106 years prior.

A tradition continues and evolves.

In 2019, Hattiesburgers from near and far gathered at Midnight on Front Street to usher in the New Year – with crowd sizes doubling the year prior.  Music provided by DJ Kujho filled the streets; and when the clock struck Midnight, the iconic Hub Sign served as a hearty reminder that the “Hattiesburg spirit” that Reverend Solomon spoke so passionately about was alive and well.

In 2020, however, the sign has served more than the a reminder of the community’s rightful place as a premier city in the Gulf South. This year, it has served as a beacon of hope – that regardless of the devastation that even a pandemic can bring, Hattiesburg’s bold vision to go after and achieve big things remains. In a year that continued to provide challenges, it has meant putting others first while protecting the vulnerable, preventing the overrun of the health care system and prioritizing public health through the private sector.

Although the Fall provided a glimmer of hope that gathering might be possible for ushering in 2021, growing numbers for new positive cases of COVID-19 and an average of 100+ hospitalizations proved otherwise. In late December, under the guidance of local health care leadership and the Mississippi State Department of Health, the City of Hattiesburg chose to host the event virtually.

The decision to host a virtual event in lieu of a public one was wrought with tough conversations. Events like Midnight on Front Street are a part of what makes Hattiesburg a premier city for entertainment and culture; but, making hard decisions for the good of public health continued to be the standard. In this, it was the city’s hope that the Hub Sign served as a bigger symbol for not only going after and achieving big things – but coming together (separately) for the good of its families, its neighbors and ultimately – the community at large.

In 2021 – with a COVID-19 vaccine widely available and proven therapeutics for treatment – gathering again was possible for an even more exciting Midnight on Front Street. With an iconic backdrop, residents and visitors were able to fellowship with one another, take in culinary talent, the best of Hattiesburg’s music scene, fireworks and of course, see the Hub Sign drop at Midnight.